There is a skill that everyone goes after. It is a skill so impossible that if we stack all the talent in the world we would still be miles away from any kind of competence. Yet still, we devote our whole being and spend all of our time chasing it. And when we think we have found it, we are hypnotized by its allure.

We have a longing for what the future holds. Often we are optimistic about our own life but when it comes to the future of the world, things go south, pretty quickly. But why is this happening? Who is to blame?

People will analyze and give you their take on how things are going to turn out since making predictions and throwing opinions don’t require any sort of expertise and cost nothing. Things though get organized when it comes to the press and the whole commentary sphere.

Problem-solvers take an issue and cut it up into small, solvable chunks.
Problem-sellers do the opposite: bundling various remotely-connected issues together into one big, scary problem.
The consequence is that problem-sellers make problems look insurmountable when they're not.

One way problem-sellers are effective is by taking advantage of the Von Restorff Effect. And because the news are large in quantity and omnipresent in our digital lives we are experiencing it to the extreme.

28. Van Restorff Effect:
Things that stand out are more likely to be remembered. As such, news stories that are most unrepresentative of reality tend to be our most persistent representations of reality.

What is scary stands out the most so the news keeps getting scarier so you don’t get hedonically adapted.

This has the following result. The problem-solvers tackle a specific chunk of a big problem. They enter a seemingly silent period where no progress seems to take place since they are not solving the whole problem. It looks like they are not doing real work since no legislation is being passed or no notable progress is observed in everyday life. The problem-sellers continue making noise, crafting news stories that will have the maximum audience capture, and ignore everything else. That is why innovations seem to pop out of nowhere, where in fact the work was being done in stealth mode all along.

For the problem-sellers, the more emotionally engaged you are in a story the easier it is for them to manipulate you and sell you more problems since your behavior is predictable. It is better for the news for you to rage about how climate change will be irreversible in 7 years — something we are being told since the 70s — than for you to also be exposed to statistics that might imply a more positive, contrary trend(see here and here). Not so you can pick sides and attack each other but so you can have a more well-rounded view of the matter.

A gradual reduction in poverty and child mortality rarely makes a sudden splash so they are not considered newsworthy. If the world is ending though, that is news. These predictions — prophecies in fact — give us the impression that we can predict the future and the press sells us the certainty we are asking for.

Predicting the future gravitates toward reflexive pessimism because magnifying what is right in front of you is far easier than taking into account all the possible solutions we will come up with as a species.

Or as Jason Crawford puts it in Why pessimism sounds smart:

[…]optimism often requires believing in unknown, unspecified future breakthroughs—which seems fanciful and naive. If you very soberly, wisely, prudently stick to the known and the proven, you will necessarily be pessimistic.

If you are a doomsayer you actually refuse that problems can be solved. And this has even further consequences that go beyond the mood of the individual. From people not wanting to have kids due to climate change to apocalyptic scenarios that the AI robots will turn against us and kill us.

It is much harder to imagine how we might build a carbon capture machine that extracts CO2 from the atmosphere making carbon-free fuel for cars and other products than to just view it as an ever-growing problem with the only solution being to stop innovation and move to more inefficient sources of energy and production. Sure we need to improve upon those technologies as well but often they come at a cost when applied in mass as happened in Sri Lanka where organic farming went catastrophically wrong.

It’s easy to be a pessimist as it appears to be an intellectually serious position.

We as humans are bad at foreseeing the future but really good at coming up with solutions when problems arise. Not necessarily the best ones at the time, but better than nothing.

The rising of Chicago was such a case where we took action in the presence of an unknown threat with an unexpected solution.

During the 1860’s the entire city of Chicago was raised 5-10 feet with hydraulic jacks to improve drainage and make room for water and sewer lines to combat typhoid fever and cholera.

If you think we fucked up think the solutions we have come up as a species. pic.twitter.com/BKitivS9fj

We can’t predict the future — accurately.

That is an impossible skill.

At this point, I feel I have to showcase some examples of remarkably fallible predictions that went stupendously wrong. Not that the people who made them were dumb, but rather they were acting on a pessimistic template.

The Plane Will Never Fly 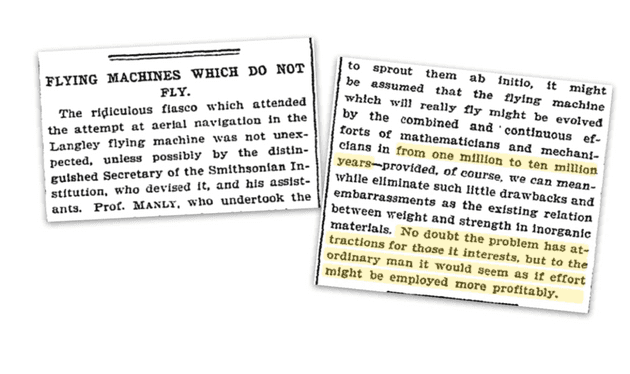 In the year 1903, the New York Times made a bold prediction that turned out to be a slight miss. They claimed that the plane, with continuous effort, will likely need 1 to 10 million years to fly. Only nine weeks later, the Wright Brothers achieved manned flight.

The scrutiny persisted though, now saying that commercial flights were only going to be for rich people and never really be a thing for the average person since they would be too expensive.

In January 1914 the first scheduled commercial airline flight was conducted from St.Petersburg, Florida to Tampa, Florida, lasting 23-minute. The first passenger(he was the former mayor) paid $400 for a privileged seat and a couple of months later regular passengers were paying $5 each. 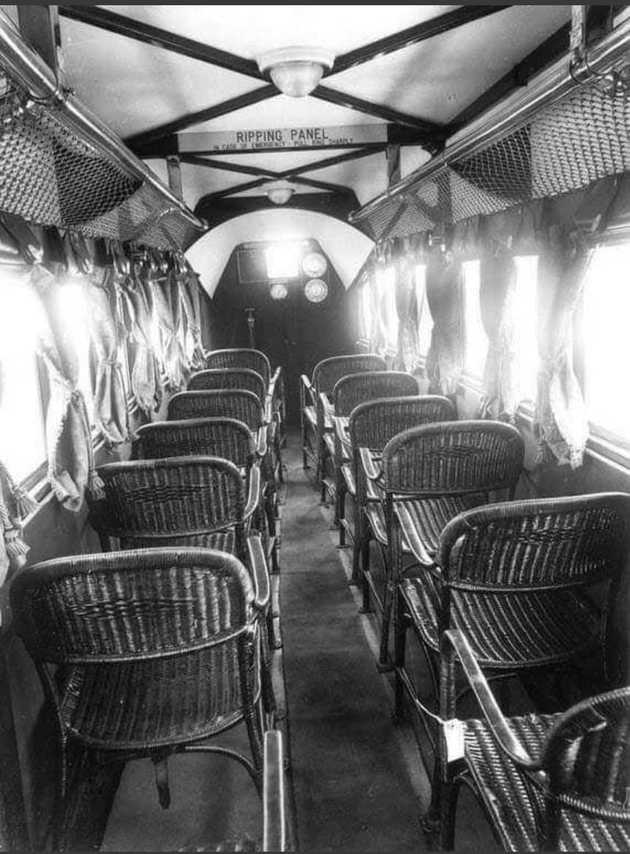 Inside a commercial airline flight, 1930

Years after we were complaining about space travel and rushed to call it a frightful waste of public money. The rest is history.

The Internet is a Fad 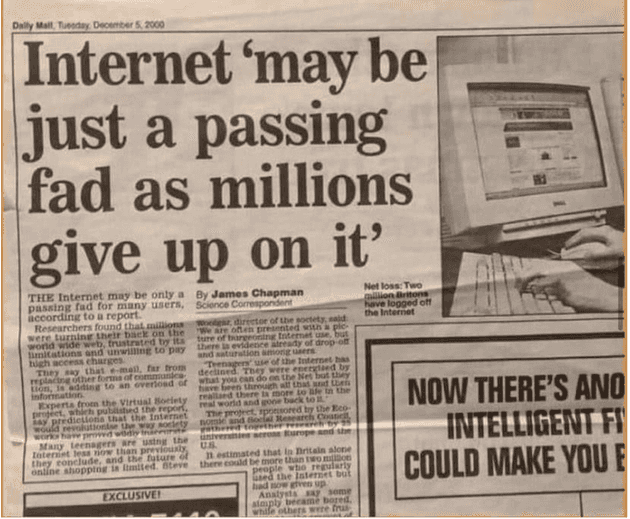 This image will most likely make you burst with laughter. But doubting the Internet in the 90s was a common and legitimate thing to do. Many were giving a couple of years max for the Internet to die off. Mentioning shopping online would laugh you out of the room. Who could have possibly forecast the rise of Amazon, since Jeff Bezos himself gave only a 30% chance of succeeding?

Science has Reached a Peak

Within scientific circles, such cynicism was present as well. No exception here too.

Albert Michelson comes to mind where in the past, quoted that science has reached a peak. There is nothing more to be discovered. A couple of years later special relativity was formed with Michelson still being around to see his prediction flip to its head.

The more important fundamental laws and facts of physical science have all been discovered, and these are now so firmly established that the possibility of them ever being supplanted in consequence of new discoveries is exceedingly remote… Our future discoveries must be looked for in the sixth place of decimals.

Albert Michelson, address at the opening of the Ryerson Physical Laboratory, University of Chicago, 1894

As David Deutsch puts it, if you say all will be fine or all are going to hell, both stances are a product of blind prophecy. You might have arguments to back-up any conclusion but the future is unknown and always had been. Being cautious and doubtful is sure understandable but it is not of any use if it is not a well-meaning constrictive criticism to improve upon existing ideas rather than shoot holes in the ground.

With the advancement of technology, came great power. Besides telescopes and microscopes and all the like, that augment our senses we now also have computer models that augment our minds. We can simulate events for years or decades and visualize deep time, realizing counter-intuitive facts. Most models are not dynamic though. They are static since they can only take into account knowledge that already exists and not knowledge that is yet to be created. Some models are extremely good and precise when it comes to narrow and specific situations but not when it comes to dynamic, interconnected ones that require creativity. So with that in mind, we can’t rely on them too much no matter how convenient the results are.

You will say hey what about history? Won’t we be in a better position to make accurate predictions if we understand the past well enough? There is this notion that history repeats itself so historians are considered, by many, experts in knowing how the future will play out. But this is a fallacy. Common patterns in history do repeat but not history itself. There are lessons to be learned from mistakes but still, it does not suffice for accurate prediction. You just can’t take abstract parameters, mash them together and make a diagnosis based on missing variables. This is a kind of false precision where you derive a conclusion that is seemingly correct, but it is based on two or more false parameters thus making it — in actuality — wrong.

History could be thought of as a spiral rather than a circle that loops itself indefinitely. New knowledge is created and with that new knowledge, new problems arise, meaning we have improved versions of problems. If we were living in a society that was purely static, history could indeed repeat itself. Cavemen, for example, who lived in a static society had the same problems occurring over and over again, like hunger and cold. It took them a really long time to gain any new knowledge so they can improve the quality of their life and level up, making their society more dynamic.

It is undeniable that the worst can happen because the very worse has already happened, many times - David Deutsch

The crux of all this is that you can’t be sure about what the future will look like. The only choice you can make is if you want to be an optimist and think of solutions or engage in fear-mongering so you can appear smart to your friends and seem informed. Since you can’t predict you might as well zoom out and see how far we have come. That is what a rational optimist does after all.